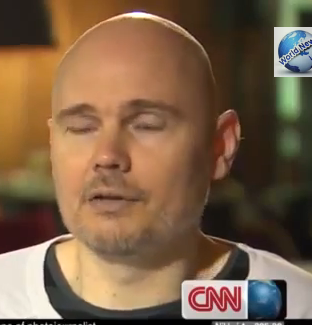 Billy Corgan, (or is is Willie now?), singer of the grunge band the smashing pumpkins, has done a pretty interesting interview with CNN in Hong Kong earlier this month. The whole transcript is here.

One part from it has been going round, and is about God as the future of rock, and his message to Christian rockers:

RAJPAL: So what are you exploring now?
CORGAN: God. I once did – a big American magazine was doing a thing called, “The Future of Rock”.
RAJPAL: Yes.
CORGAN: And, you know, they asked 50 artists, “What’s the future of rock?” And my answer was, “God”. And they said, “What do you mean?” And I said, “Well, God’s the third rail of -” What is it? “Social security is the third rail of politics in America”. Well, God is the third rail in rock and roll. You’re not supposed to talk about God. Even though most of the world believes in God. It’s sort of like, “Don’t go there”. I think God’s the great, unexplored territory in rock and roll music. And I actually said that. I thought it was perfectly poised. And, of course, they didn’t put it in the interview.
RAJPAL: What would you say to Christian rockers, then?
CORGAN: Make better music. (LAUGHTER) CORGAN: Personally, my opinion – I think Jesus would like better bands, you know? (LAUGHTER) CORGAN: Now I’m going to get a bunch of Christian rock hate mail.
RAJPAL: But that’s interesting –
CORGAN: Just wait, here’s a better quote –
RAJPAL: Yes.
CORGAN: Hey, Christian rock, if you want to be good, stop copying U2. U2 already did it. You know what I mean? There’s a lot of U2-esque Christian rock.
RAJPAL: Sure.
CORGAN: Bono and company created the template for modern Christian rock. And I like to think Jesus would want us all to evolve.

I’m not in touch with the modern commercial Christian rock scene, nor do I live in a country where one can find a Christian rock radio station on a car radio,  but I do think what he’s speaking about, even though I have heard more third-generation Coldplay clones in Christian rock lately than U2-sounds, but whatever.

Maybe that’s indeed the overall idea of Christian rock you get from the radio, but that doesn’t mean that there’s a lot of people, adherents to the Christian religion,, making rock music or something like that which is informed by their faith soemwhere, and who do not sound at all like the mentioned U2 (or coldplay) rip-offs. They might not get as much airplay and sell as much records, but they are musically much more interesting. And Billy Corgan must know that, having Jeff Schroeder in his current band  line-up (who has been part of the Christian indie scene, and played guitars on the violet burning’s selftitled album).

Mr. Corgan himself has been singing about God and other religious themes since the beginning of the Smashing Pumpkins, but does not seem to tie himself down to one religion, even though he appears to be more spiritual than ever.

What also struck me is how he describes his old band, the original line-up of the smashing pumpkins:

we were four strangers who agreed on a musical vision. And we did more harm than good.

And then he identifies one of the problems of that band as ‘false loyalty’:

I would say the key experience for me, from the original version Smashing Pumpkins was, “What is loyalty?” What is loyalty? Because I had a false concept of loyalty and I rode that ship all the way to the bottom. When most people wiser than I, would have jumped off the ship when it was to their benefit.

So people always say, “What’s your greatest career regret?” It’s when the band blew up in ’96, that I didn’t jump off and make a new ship. I rode that ship all the way to the bottom. Like, literally, until it was like the bubbles were coming up and I was sitting there like –

RAJPAL: Is it kind of like, you know, when you’re staying in a bad relationship, that you’re always hoping that something will change. That things will work out in some way, shape, or form.

Another idea that could be interesting to think about is his rejection of the very well-known dogma that suffering is good for art. I actually have never seen that one questioned before, and it’s even more interesting that he uses an Eastern religion -shintoism- to make that point. I don’t know why he uses shintoism and not Buddhism here, which is based on the elimination of suffering, and does not see a positive role for it.

Makes one wonder if the ‘suffering is good for art’ is born in Christian ideas about suffering. And if it’s indeed as valid as we all suppose…

CORGAN: There’s a long established concept that gets bandied about, which is “Misery makes for great art”. And I actually think this is – if we were asking a Shinto Monk, I think they would laugh at this idea
RAJPAL: Yes.
CORGAN: Because you’re basically saying, “Suffering’s good for business”. And I don’t think suffering’s good for business. Crazy’s good for business, suffering isn’t. I think suffering or the gestalt of, “Here I am, ripping my heart open” – I think that lasts for about two or three albums.
RAJPAL: Yes.
CORGAN: At some point, you have to mature into the deeper work. Most people are living lives of sort of survival. And constantly posing an existential crisis, either through fantasy or oblivion, really has been pretty much explored in rock and roll. At least in the western version of rock and roll. Maybe not over here in Asia, but we’ve sort of, kind of, been through all that.

I wonder if his ‘deeper work’ as he sees it himself will ever be able to reach as much people as ‘mellon collie and the infinite sadness’, which was one of my favorite rock-albums in the nineties, but I must say that his last CD ‘oceania’ is not bad at all and better than most things I’ve heard from him from the nineties!
But it seems like he is not concerned with getting that success back.

Well, if you make repressed, middle class, white, suburban, existential crisis music and a bunch of people just like you buy it, is that success? […]  I mean, yes, it’s success in the form of communication. But is it success in being true? No, it’s not true. It’s true to its corner, but it’s not true.

Maybe it’s just me, but the guy says a lot of things (some of which I’m not even talking about here) that are really worth contemplating.. Rockstars can be interesting sometimes, don’t they?