Another side of the situation for Christians in Egypt

Vinoth Ramachandra shared this text coming from Egypt, which gives another view on the situation in Egypt. The source is the Bible society of Egypt here. Another contact in Egypt (an Anglican priest) commented ‘I agree with the content’.

Egypt has an encouraging story that is not being told in much of Western media!

When more than 85 Churches and institutions were viciously attacked and burned (a profound blow of disgrace and humiliation in this culture of “honour”), the non-retaliation of Christians was both unexpected and unprecedented.

Immediately following these attacks, the leader of the Coptic Church, Pope Tawadros II said that if the destruction of these properties was the price Christians in Egypt have to pay to get a free Egypt, then that sacrifice is worthwhile!  His – and all other Christian leaders’ messages – have helped the Christian spirit of forgiveness to be powerfully demonstrated in Egypt.

This practical application of Christ’s teaching by millions of Egyptian Christians should have made worldwide headline news! 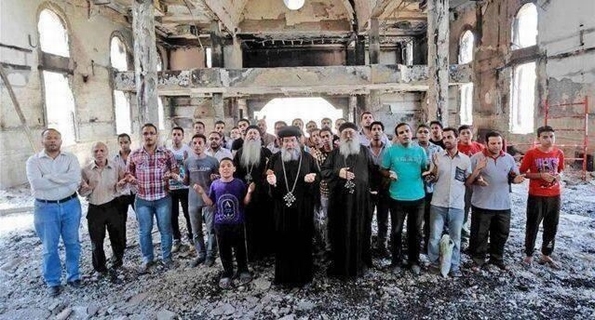 Many Egyptian Christian leaders are reminding their flock that the Church consists of the people of God, Christ’s body, and not the buildings in which we worship. Thus the Church can never be destroyed!

Egypt is not on the verge of civil war! On the contrary, most Egyptian Muslims and Christians are more united than ever in their common vision for the future, as together they have rejected extremist “Political Islam,” and are working towards the noble task of establishing a civil society which recognizes all Egyptians as equal citizens.

Egypt, however, faces incredible social, economic, cultural and political challenges as it tries to rebuild after three years of radical change and confusion. As a result many Egyptians are weary and pessimistic about the present situation in their country.

One of our projects is a special edition of the Sermon on the Mount (in which Jesus presents principles of His Kingdom which reflect the aspirations of many Egyptians at this time), and a variety of tracts taken from it, for wide distribution.

Yes, in the face of war, oppression, destruction of their property and church buildings those people share the sermon on the mount, out of which come the golden rule, the ‘blessed are the peacemakers’ and other beatitudes, and the command to love enemies. Seems like those people are really taking Christ seriously…

Being a follower of Christ is not easy. Sometimes, we want to take revenge and engage in retribution but this is not the way of Christ.

I am impressed and praying for my brothers and sisters in Egypt!

Like Loading...
This entry was posted in christian life, Uncategorized and tagged Christian persecution, Christianity in Egypt, coptic Christians, Egypt, love your enemies, sermon on the mount. Bookmark the permalink.