Now this is extreme Christian introvertphobia!

Introvertphobia, or extravertnormativity, the tendency to try to have an all-introvert environment, which might mean that the introversion of eventual introverts that are in the way of this grand vision might need to be erased, was one of the topics of one of my recent posts here, and might be explored more here in the future, since I need to tackle more angles of it, and not much people seem to ever have done such… Today I saw an example of it that I hope is representative of nothing  bigger than just one USAmerican churchplant, but even for that it’s a bit painful for me to see.

To sum up the difference between introverts and extroverts that are important for this this discussion I will quote a part from the earlier post:

To simplify things too much for those wondering what the introvert/extrovert business is actually about: an introvert gets his energy from being alone, an extrovert gets it from being around people. So I don’t like big groups and mass event. Too many people around me can drain my energy especially if I have to pay attention to them, and I might need lots of time alone to regain that energy… And oh, it’s not a lifestyle of choice, it’s an inborn personality type parameter. One can learn to not act on it and pretend to be extrovert in some cases, but that would be at the expense of a lot of energy and  a loss of identity.

So I was discussing the problem of the agressive extravertphobia inherent to certain forms of prescriptive male gender roles (a topic for a later post) on a  FB group earlier today, when someone gave me the following, which is taken from a Sunday school handbook from an American church plant. It’s about David Brainerd, who was a missionary to the native Americans: 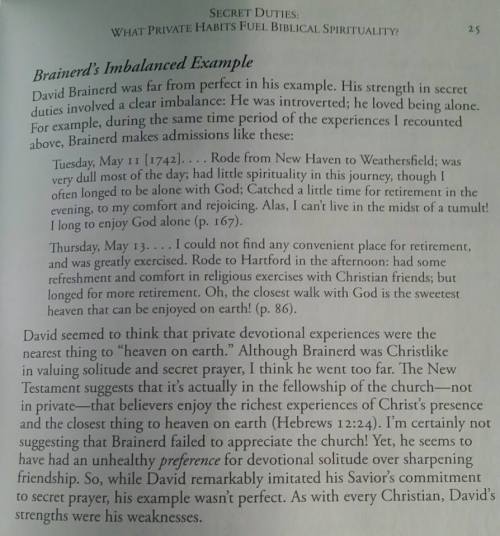 It might be that some people don’t understand, but reading something like this triggers all my alarms, and makes me see every introversion-erasure I’ve met again before my eyes. But this time it’s cloaked in Christian condemnations too….
I suppose it has something to do with the influence of a very extroverted surrounding culture that isn’t very understanding towards others. I do have the idea that some American milieus are even worse than the working class environment that I described in my last post on this subject. I also fear that the words ‘an unhealthy preference for devotional solitude over sharpening friendships’ can be meant to have more control of the people. The more they are in the group the more they can be controlled.

All of this is all the stranger because it is the most normal thing in the world for spiritual people (of any religion) to take time alone for prayer and meditation, no matter how many friendships they do have.
Even Jesus did so, and spent a lot of time alone in nature to pray and be with His Father so thinking that there’s something wrong with needing time alone to ‘recharge’ (as an introvert) and reconnect with God (devotionally) would also exclude Christ Himself…

And it’s very new to me too. While extravertnormative behaviour can be prevalent on stage with group events and stuff like that, such a deep condemnation of the need to recharge alone to connect with God completely caught me off-guard.  Because for me it’s so atypical: All my life I’ve had evangelicals mostly defend ‘quiet time’ alone with bible and prayer and so. In other Christian traditions there’s even more contemplative practice.

I must say that I hope that this is a single example, and that these things are rare. Not that there isn’t a lot of Introvertphobia and extravertnormativity in much more subtle forms in certain Christian circles, but this is, as we say in Flemish, too stupid to knock dead. I don’t see how anyone can take this seriously…

But I suppose than in the end it’ll come to this:
–“Being introverted is an orientation, not a choice…”
– “No it isn’t, repent you sinner and join our very social group every moment of your free time!!!”
-“AAAAAAAaaaaaaaaaaaaaaaaaaaaaaaaah”
(yes, to an introvert this sounds very much like hell!)

so what do you think?

4 responses to “Now this is extreme Christian introvertphobia!”