We interrupt the blog hiatus that is almost over for a musical anouncement:

To all 5 of you who are reading this,
which might include email-intercepting agents from the FBI, the Belgian secret service and the Reptilian illuminati.
(Yes, you too! Please read on! Have a listen)

The release of the new Bram Cools album is nigh!
Or in other words, new home-made musical madness from an alternate universe, against all trends and zeitgeist and the laws of logic and Hegelian dialectics and hopefully with a better sound than ever,  will soon be available on the usual bandcamp site.

It should have been finished this summer, but we never control life as much as we’d like to, and time is a strange thing and never reliable.  So with a little correction by reality the new and more realistic date is set somewhere in November… The ‘it’ referred to earlier here is a collection of 20 songs in different styles and even languages that will be called ‘ Beware of Plato’s cavemen’.  It also can be considered the third album in the ‘cyberluddism‘ series, and as such also as a concept album of sorts again. Both musically and lyrically there are some unifying themes hidden somewhere, although rather loosely this time.
While I attempted at first to make some simple songs with primitive electronic arrangements, it seems everything grew over my head again, and I suddenly had a long album full of songs with much more complicated arrangements than I had planned, interlayered with some instrumentals for which no actual instruments were abused. On the other hand seems that folk and pop have regularly won the fight against the bleeps and synths this time. The music as it has become sets the stage for explorations about how our constructed realities and illusions clash with Reality, if there’s even such a thing, and other subjects of faith, despair, world peace and the end of the world… The number of languages is going up again too, most are still in English, with 2 songs in Dutch or Flemish, 1,5 song in toki pona and some lines in Latin.

The current artwork is temporarily, and will get updated at the right moment. This does probably fit with my lo-fi antiprofessional approach though…

Those following soundcloud will find the finished and completely remixed and remastered versions of Welcome outside, Splintering dimensions, Hold on, mi wile e ni, Shadows of shadows, Muggles gonna muggle and Selfmade universe on the album, although not in that order… 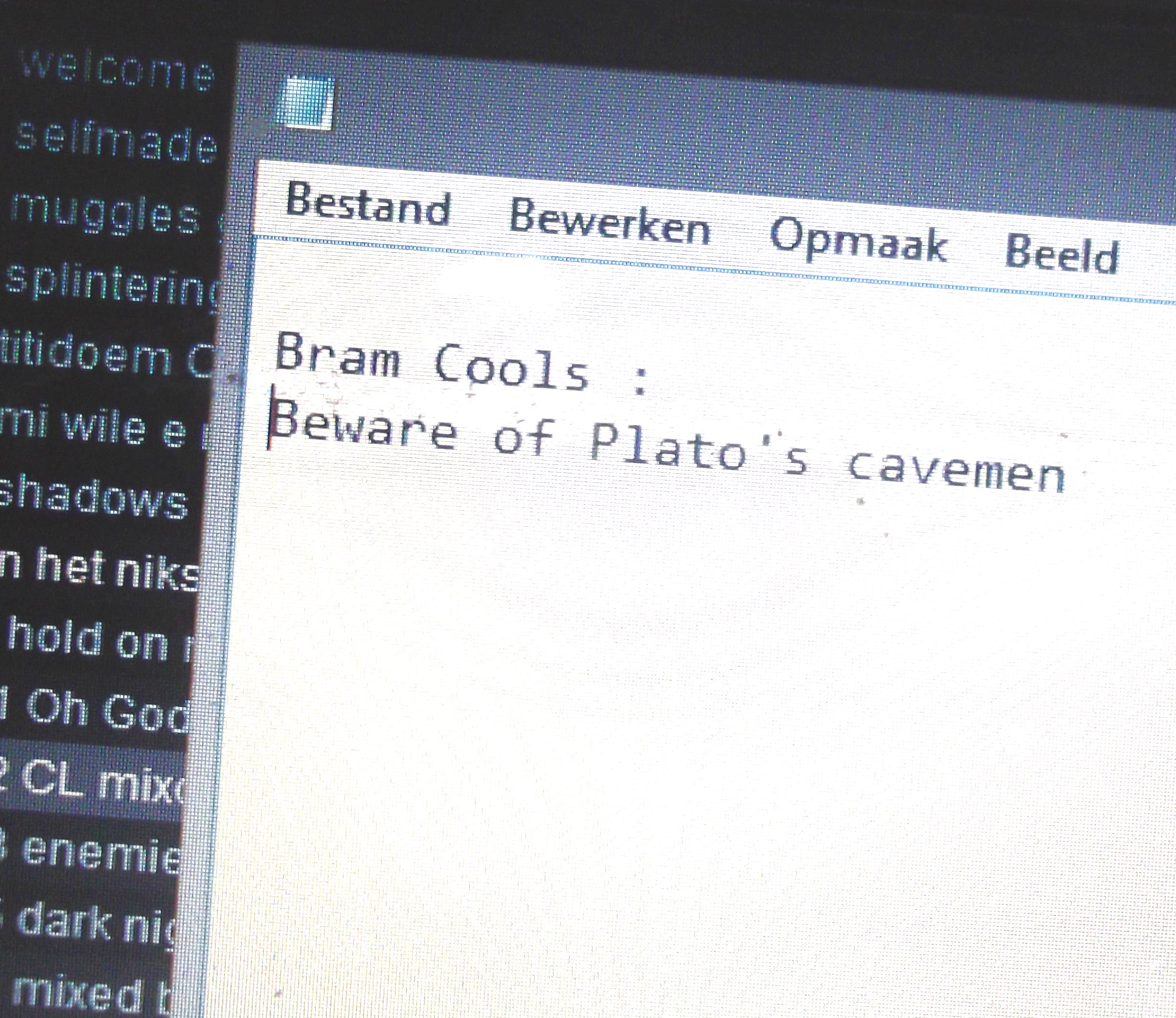 Like Loading...
This entry was posted in all kinds of music, music, new music, Uncategorized and tagged Bram Cools music, indie, music. Bookmark the permalink.