I think on our best days maybe for even just a few seconds or minutes we all have, saintly actions and so for me saying, this project’s good saint Nathanael, I’m aspiring to have more of those, good moments where I treat my, my fellow man really well, and less like time where it’s just focused about me. (album trailer)

(4.5/5 stars)
(Nederlandse versie hier) I haven’t been following new music lately as much as I did when I was younger, but sometimes there still  is new music that I’m rather exited about. And today I’m very happy to announce the release of ‘Hide No Truth’ by Good Saint Nathanael, of which the burned CD hasn’t left my CD-player this week I think. (I was lucky to have a preview copy for this review!) It’s a remarkable and intriguing album with very quiet folk-based music but not at all easy listening nonetheless. I’m sometimes reminded of what an acoustic-based beck or the eels could record when they forget a rhythm section, or maybe a bit of Bonny ‘Prince’ Billy who plays the later dark Johnny Cash repertoire, with even echoes of a more inspired Daniel Johnston or a completely deconstructed mewithoutyou. But maybe all the name-dropping is just silly. In a just world this would become a reference album in the near future for this kind of music. And if you want to make sense of those descriptions, it’s better to just check out the singles Lightning,  Everything that’s lost and better.

So who is this guy? Good Saint Nathanael is the new project of Nate Allen, who is probably mostly known from ‘Destroy Nate Allen’, a fun folkband with DIY punk energy that discovered on myspace ages ago, in another world that was a lot simpler and full of wondrous new unknown and exiting obscure music. While I still feel the spirit of that world in the music of Good Saint Nathanael-something I often miss in todays musical landscape-, both projects are quite different in output,  with Good Saint Nathanael being a lot more mature and introspective, as well as very subtle and deep both musically and lyrically.

Basically the album consists of nine dark and rather minimalistic folksongs based on a skeleton of vocals and folk guitar, arranged with varying instruments (ranging from ‘broken tape noise’ to a harp) that create very intere 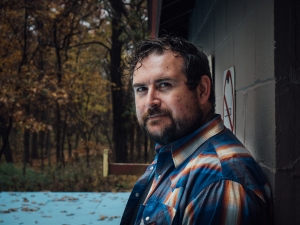 sting atmospheric soundscapes in the background. Nate Allen disarms  the listener with the brutal honesty of his haunting voice, and most of the songs succeed fully in their ambitions without anything even remotely sounding  like a rhythm section anywhere on the same continent. That alone can probably be seen as quite an accomplishment in 2019.

Content-wise the whole album is one of spiritual struggle, traumas resulting from religious abuse, and hope and faith in spite of all the darkness, all mingled into each other and often described very poetically but with a brutal honesty that might blow some sensitive souls off their socks.  While others would probably have made a break-up album about their faith this is certainly not a deconversion album like Derek Webb’s fingers crossed (see my review for that one here).  So instead of an escapist and self-destructive “women and whiskey are persuasive at making me forget you” this one always returns to hope and light, no matter how frail,  ending with the open-ended certainty that

Which is something much-needed in these days. Hope, and a journey of falling and standing up again with some mildness for when we fall is one the things this world might need the most even right now! And when it’s packaged in such beautiful music it’s even better…

Outside it’s freezing when I write this, although the promised snow has 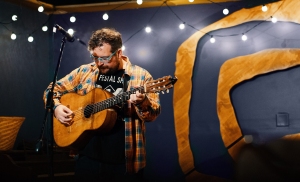 n’t fallen yet. I’m working on my laptop while listening to ‘hide no truth and for a moment everything fits perfectly: a good Belgian trappist beer, the quietness of the winter night, and music, honest and vulnerable. This is how enjoying music should happen!

Good Saint Nathanael can be found here:
website(with all kind of links for download and streaming)
See also the album mini-trailer
Read also this interview

Disclaimer: I was indeed given an electronic copy of this album for writing a review, but all the enthusiasm is purely my own.